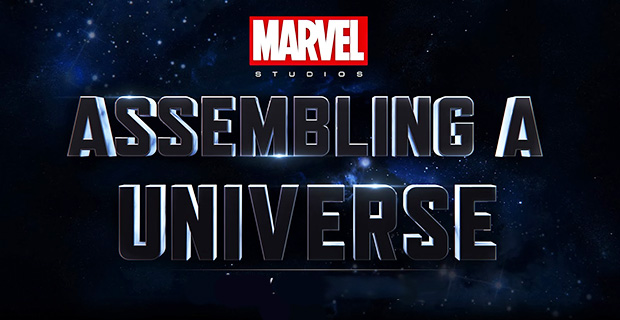 After the release of “Captain America: Civil War” this Summer we will be starting off Phase 3 of the MCU, I decided to look forward to what I would love to see in the future after Avengers: Infinity War Part 1 & 2. After the events of those films we will be entering Phase 4, so here is what I would like to see happen during this “phase”. Along with the characters I would like to see in the next phase, also, I will put up my ideal casting (current actors) even though the films will not happen for another 5+ years, I just LOVE fancasting if I am honest. The list will not be in any sort of order, just names as I spin them off from my head. This is NOT a list of what I expect to happen, this is just a list of what I would like to see. Would LOVE to know your “dream Phase 4” either drop a comment or hit us up on Twitter with who you would pick for yours. 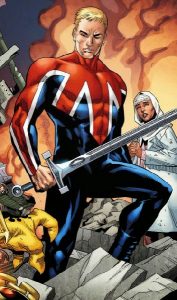 This is the ultimate dream idea for me, Captain Britain is a thoroughly enjoyable character, originally designed as the British equivalent of Captain America. While some have always seen Captain Britain as a bit of a joke, I can assure you, some of us Brits love him. It’s super bad ass that we got out own slice of the Marvel pie (he is not the only one), however for me, he is one of the better British characters. My ideal actor to play Brian Braddock, would be Charlie Hunnam, huge fan of his work, can see him being a pretty bad ass Captain Britain.

I’d love to see the “Captain Britain and MI-13” arc by Paul Cornell from 2008 adapted to the big screen. I read it last Summer and it revived my love of Braddock, I’d like to think a lot of British fans of the MCU and the books would like to see this arc included in the future of the franchise. (There is talk Cap B, being part of X-Men universe so owned by Fox, would love confirmation if anybody knows either way, thanks in advance). 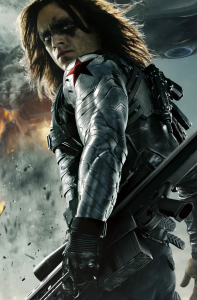 For me, the best way to progress Captain America in the MCU, would be a widely unpopular choice I imagine and that is to have Steve Rogers killed off in Infinity War Part 1 or 2, having Bucky step up to fill his shoes. After Bucky takes over for Steve, I think he should go solo in Phase 4, most people will know Sebastian Stan signed a multi picture deal rumoured to be 9 films, already featuring in Cap 1, Cap 2 and filming Cap 3 (time of writing). So he has a good amount left on his contract, plus after reading some issues in which he takes over after Steve’s death in the comics, I can really see even the more casual comic film fan enjoying Bucky taking over.

I’d like to see the “Madbomb” arc from King Jack Kirby himself adapted for Bucky, I know it is Cap and Falcon however pretty simple to tweak it a bit to have Bucky and Falcon teaming up to save America. While the stories started off brilliant towards the end they fell off a bit, but there is so much to take from that arc I think would be perfect on the big screen.

Guardians Of The Galaxy 3 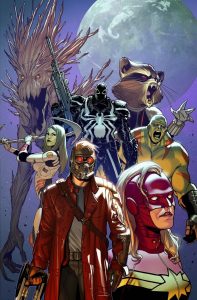 I recently started reading the Marvel NOW latest version of Guardians Of The Galaxy I have completely fell in love with this team. The sooner this team gets on the big screen the better, and now with Sony open to Marvel using their purchased properties, there is a big possibility that Agent Venom can also join the team. My dream Guardians team up would be, Groot, Rocket Racoon, Gamora, Drax, Star-Lord, Captain Marvel, Agent Venom and Adam Warlock (who would actually be Star-Lords Dad). All returning cast, with Yvonne Strahovski as Captain Marvel, Nikolaj Coster-Waldau (Jaime Lannister) as Adam Warlock and Travis Fimmel as Agent Venom.

I will be honest I have read VERY little Guardians, before the film was even announced I wasn’t even aware of them. Since the film though I have read some stuff, personal favourite is “Cosmic Avengers” by Bendis, McNiven and Pichelli. It’s a very fun arc which I could see James Gunn doing perfectly if he were to make the third instalment, which should NOT be called “vol 3”. 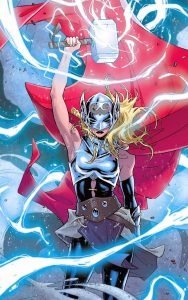 Some may dislike this idea, it is a character that conjures up many arguments, I will just say that this newly revised female Thor is outselling the previous Thor by 30%, proof in itself that she is vastly popular. I have read a fair share of the comics myself while very different to what I was used to it was a thoroughly enjoyable read. With the release of Captain Marvel in 2018 and Wonder Woman in 2017 I think we will finally get to see female characters given the screentime they deserve, plus after this years “Mad Max Fury Road” we have been given further proof that females can be equal and even more badass than their male counterparts. Personally I wouldn’t choose the route they went in the comics and use the character they used, personally I’d pick Lady Sif to take over and have Jaimie Alexander continue the role.

With this character being so young, I decided to choose a Thor arc I particularity enjoyed I not so long ago read the Surtur Saga and couldn’t put it down. I’d be a happy camper if we ever got to see that arc adapted to the big screen even with my complaints of Loki in recent times, I would put that all aside to see this wonderful arc by Walt Simonson which is possibly in my top 10 arcs of all time. 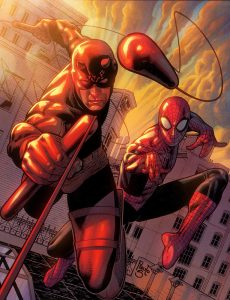 This is a team up I have been dying to see since I was extremely young, I have loved Spidey since, well I couldn’t even pinpoint a time I haven’t dreamt about these two joining forces. As for actors I 100% back Charlie as Matt, he was superb in the first season of “Daredevil” and willing to give Tom Holland the benefit of the doubt, personal favourite choice would be Dylan O’Brien though. That being said I am excited to see Holland take on the role.

Let’s be honest ANY arc in which Spidey & Daredevil team up to take down Kingpin, this is all I have wanted in the comic world. 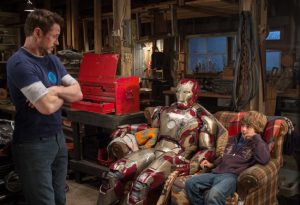 I know this one is kind of obvious, but I feel like this is the perfect way forward for the franchise. Ty was introduced in Iron Man 3 as you all will know. I said the second I seen it that he will be Iron Man in the future, now that Simpkins is becoming a huge name Jurassic World & Insidious I can see it even more. Not sure if I see Tony stepping down or dying, I just see it making sense that Ty’s character take over the mantel of Iron Man.

As for the story, really hard to say, I do not want a reusing of a previous Iron Man arc from the books (not that I am familiar with any late teen Stark arcs?). I’d rather see a completely original story used in this. 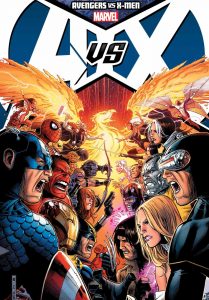 A vs X style story, leading into having X-Men back in the MCU for Phase 5.

That seems like a LOT of characters I know, but this stroy-arc needs a good amount of members as the book cover shows. It’s a fun run, if you haven’t read it I recommend it. This would be the perfect way of bringing the entire Marvel back under one banner. May be a strange way to start off a world after such a story, but I can see it bringing in a lot of fans into the MCU that aren’t already here (if there is many left), it may come across as a similar approach to Captain America Civil War in the way it’s clashing the heroes. That being said I can see this being Civil War and that bit more on the big screen, in the book form Civil War is better I just see A vs X making a brilliant film maybe even better than Civil War translation to the big screen. 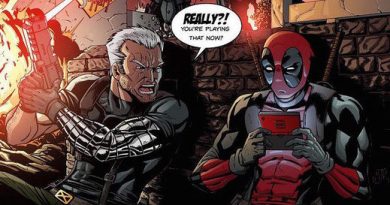 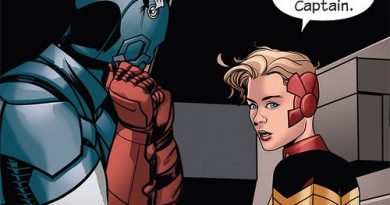