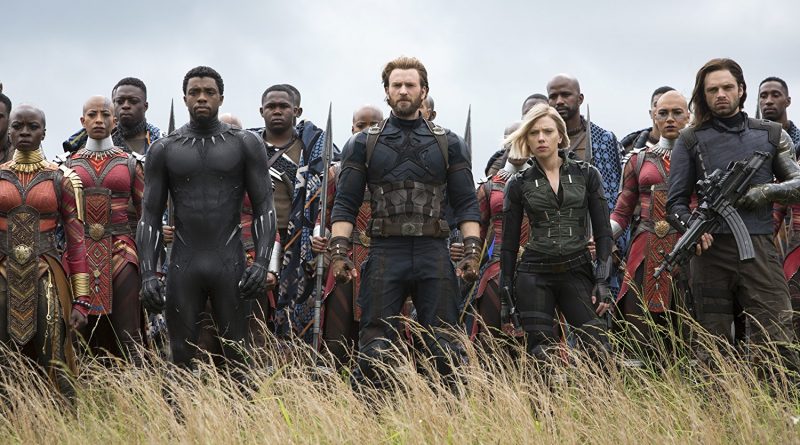 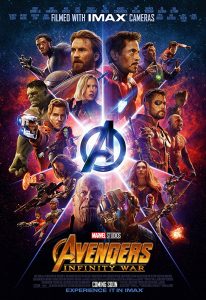 After a turbulent few years that has seen the Avengers break apart and the Guardians of the Galaxy rise, intergalactic conqueror Thanos (Brolin) is on the hunt for the powerful Infinity Stones that, if fused onto his Infinity Gauntlet, will grant him the ability to eradicate half of the galaxy with a snap of his fingers. 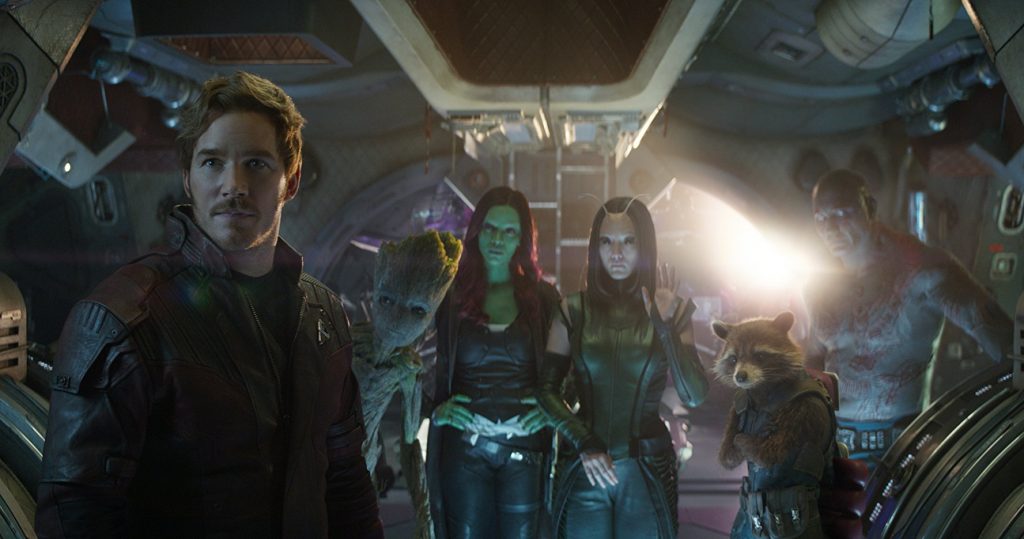 Yet many of the heroes find themselves as targets and must face an uncertain destiny. Only the united strength of the Avengers, Guardians and their allies, including T’Challa (Boseman) and Bucky (Stan), can they stop Thanos and prevent a looming galaxy-wide genocide…

Few titles can use the term truthfully when describing a majorly hyped, long-awaited or mega-budget blockbuster. Most recently it was ‘The Force Awakens’ who used it, and rightfully so for what it encapsulated. Now move over Skywalker – it’s the Avengers who claim this title for a movie that was set in motion 10 years ago with 2008s ‘Iron Man’. Now, 18 films later and goodness knows how many ‘shorts’, comics, games and TV series, ‘Avengers: Infinity War’ brings together an ensemble of superheroes and villains to close many chapters on this on-going Marvel saga but pens new ones for the future – however uncertain it looks to be when the credits roll.

This film bleeds passion and understanding of the source material, and that is key to success. From the rousing and often haunting soundtrack by Alan Silvestri to the visual effects team and directing Russo brothers behind the camera than with the on-screen talent who have brought comic book characters to life and people we have come to love, or hate, over 10 years, everything on screen has purpose and point.

It’s a visual splendour of inter-galactic battles on various planets and terrains where superheroes are allowed to be super but are also allowed to be human – a key factor to the success of these films being audiences connecting with the humanity in everyone from heroes to villains. It makes them easy to love, hard to hate, but totally rewarding to just enjoy. No character here is wasted; yes, some don’t get as much screen time as others, and how logically could they without this turning into a production line of “money shots”? Yet everyone gets a moment, be it big or small, to make you laugh and/or cry for whatever reason, they get a moment. Whoever your favourite MCU superhero has been over the last 10 years, you w, i’ll have that confirmed in ‘Infinity War’. 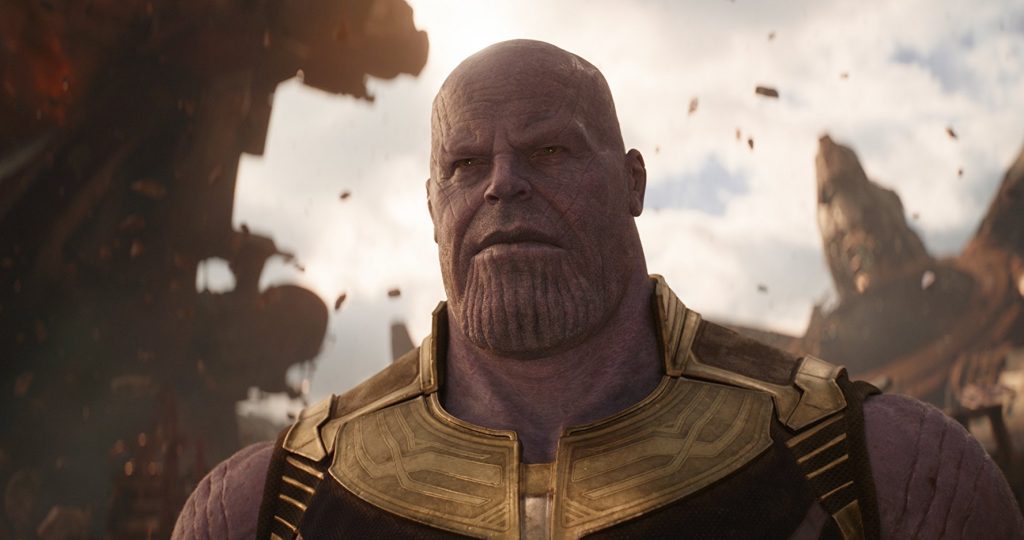 However, one person gets the screentime he’s deserved and waited for – Thanos. Brought to life with a superbly chilling, and sometimes empathic, menace by Josh Brolin in motion capture and vocal performance, he’s the MCU villain all others have been leading to. He’s a being fuelled by the desire to do what it takes to bring harmony to the galaxy, and if that means wiping out half of it for the greater good, then he will be the one to do it. Not just a 2D villain who goes around wrecking things, he spends much of his time laying out the reasons why he is doing what he is doing; why he does it, how he does it. His paths cross with many of the heroes, some he leaves a lasting impression on because of it, but others may come over a little rushed and under-cooked. It would have been great to see more of these ties made stronger in previous films instead of cramming it all in here.

With bulging purple biceps, a “nut sack” chin (according to Star-Lord) and a gleaming gauntlet the size of a small child, Thanos is in this for the long run and he is cunning, cruel and god-damn dangerous! Anyone who throws a moon out of orbit deserves to be seen as dangerous.

I mentioned “cramming” a moment ago, and this film crams everything in. Eighteen films worth of heroes, locations, stories and relationships fuse together into 3 digestible mini-quests and converge for one united climax. However, it may take a viewing or three to fully take everything in. It’s not confusing to follow, but somethings may be lost with the number of characters on screen and plots zipping across left, right and centre. From Titan to Earth to Space to Knowhere – you don’t get chance to breathe from the chilling opening moments, so prepare yourself.

While the movie itself is packed, the narrative doesn’t sag. There is always urgency. Always threat. Always danger. Always humour. Always something to see. It might not have hurt to cut 15 or so minutes off and reduce some location hopping, but that’s personal preference. Overall it doesn’t hurt when you see them taking time to flesh out the important moments.

With a strong narrative, comes strong themes. The theme of ‘Infinity War’ is probably sacrifice. What will you sacrifice to get what you want? Will you sacrifice others? Will you sacrifice a social standing, a relationship, a rank, your ego? It’s hauntingly present even when you’re laughing at the character interaction – and believe me, you will laugh. The humour is on point as expected for a Marvel film, more so than ever in some ways, thanks to the characters we’ve loved finally coming together. Chris Pratt, Tom Holland, Benedict Cumberbatch and Bradley Cooper, in particular, are on fine form, but old favourites such as Robert Downey Jr, Chris Hemsworth and Don Cheadle haven’t forgotten their chemistry and how fun it can also be in the Marvel universe. 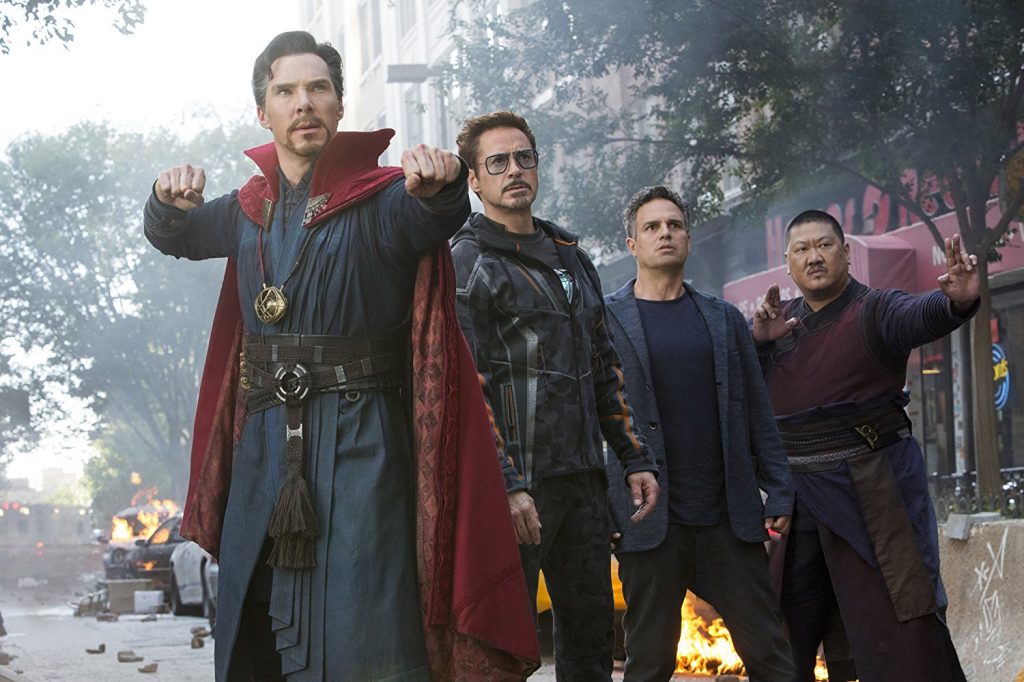 Just don’t get too comfortable chuckling away at their cheeky banter, because Thanos is just around the corner to remind you of the stakes faced here; this is NOT a film where happy endings are dished out because the good guys are always good and evil withdraws into the shadows.

This is a film that rewards the fans for supporting 10 years of creativity and escapism.

This is a film that carefully weaves 10 years of stories into 1 narrative.

This is a film that isn’t scared to challenge your expectations and ridicule your fan theories.

This is a film that can turn from light-hearted, fist-pumping adventure to harrowing, emotional distress at, well, a snap of the fingers.

!Editor Note!
Given the grand scope of Avengers: Infinity War, Movie Corner has decided to try something new and we will be adding community members reviews to our Infinity War review. We can’t guarantee this will become the “norm” for out event movie releases, but it is something we are looking at as an idea, be it included in our reviews or its very own segment.

What the Craggus Saw 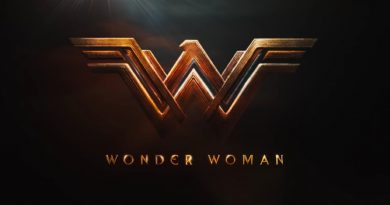 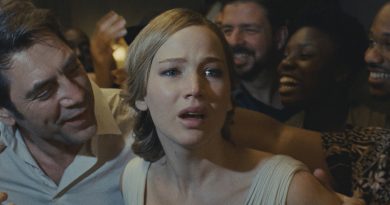 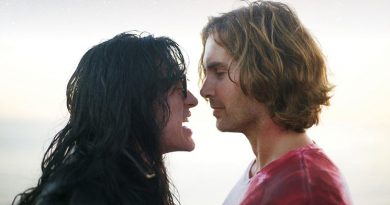