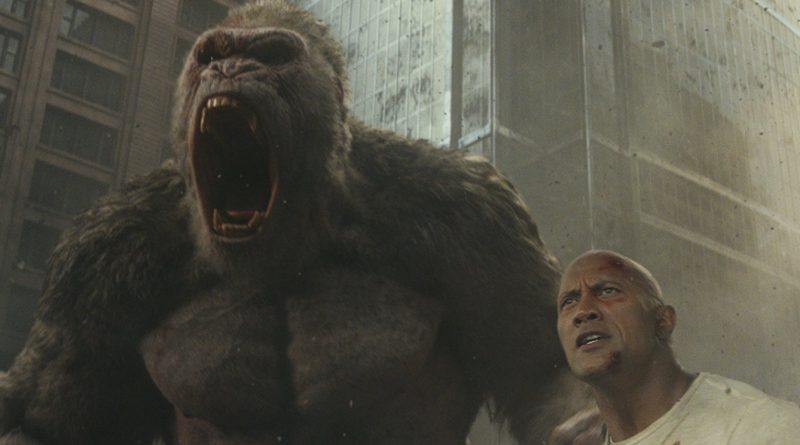 For those that are unaware, Rampage is based off of a 1986 video game where you play as one of three monsters, and your objective is to smash down every single building while trying to survive military onslaughts and eating humans to gain more health. After you finished that level, you move on to the next level continuously until you die.

It’s a very simple premise, but it works as a video game.

So how on earth do you even make this into a movie?

Option A: They don’t, because it’s such a paper-thin premise for a movie.

Option B: They make a really fun movie that has loads of destruction and mocks the entire premise with constant ridiculousness.

Option C: They make a unique character study of the three monsters as they play the anti-heroes against an “evil” military.

Option D: They make a mostly serious movie that highlights a relationship between one of the monsters (George the ape) and Dwayne “The Rock” Johnson.

Well, you already know which option they picked.

It’s very weird how often this movie tries to take itself so seriously. The movie spends the vast majority of its time building up Johnson’s character as well as fleshing out the schemes of the evil corporation that accidentally made these monsters.

Both of these aspects are extremely generic, standard, and uninteresting. Johnson, of course, isn’t really even playing a real character; he’s playing Dwayne “The Rock” Johnson. And this movie tries to get away with that due to the fact that Johnson is likely the most beloved actor in Hollywood currently.

Unfortunately, this movie is called Rampage… and I came to this movie to see a “rampage”, not Johnson and his friendship with a monkey. You may be thinking, “Steve, it’s unfair to judge this movie based on what you wanted.” And I would agree with you; the only reason I’m bringing up what I wanted is because what they provided was boring and uninteresting.

One of the biggest character traits of Johnson’s character is that he hates other humans. How did they end up relaying that information in the movie? By having other characters literally spell it out. There were at least two or three moments in the movie where some character says to Johnson’s character, “Man, you must really hate other human beings.” One of these lines was so sudden and inorganic that my brother and I had to try extremely hard not to burst out laughing.

The majority of the dialogue is character development via exposition, and it gets old really fast, especially since all the characters in this movie are just stereotypical character tropes. In fact, Johnson even has a built-in, underdeveloped love interest, and this love interest comes complete with a scene or two ensuring that she is indeed strong-and-independent (and she don’t need no man).

The movie takes an extremely long time to start rampaging. When they finally do have a scene of a giant animal obliterating something, it was the first time I actually had fun watching the movie.

Rampage works best at its most ridiculous. The over-the-top scenes with overgrown monsters, the moments of cheesy B-movie dialogue, and the majority of Jeffrey Dean Morgan’s over-the-top character scenes are the most fun parts of the movie. However, in order to get to these scenes, you need to sit through a boring story about the glorious Dwayne “The Rock” Johnson.

In fact, almost every movie I’ve seen Johnson in, he was serviceable at worst, and the most entertaining part of the movie at best. In Rampage though, I think the movie would have benefited greatly if they scrapped his character. There’s almost nothing the movie gains by focusing on his character and using him to humanize George the big ape.

Speaking of firsts for The Rock, this movie’s cinematography was shot so off-puttingly that there were a half dozen scenes that made Dwayne Johnson look extremely ugly. It was weird.

For the fun of it, as I am already getting bored talking about this movie, I’m going to share with you my fan-edit of the final fight. It’s spoiler-ridden, so if you actually care about getting Rampage spoiled for you, then skip these paragraphs.

So in the final battle, Johnson and stereotypical love interest #8954 find a way to make George friendly again. So then, Johnson and George try to fight the other monsters, “Ralph the wolf” and “Lizzy the reptile”. But most of the fight is just Johnson running around doing very little while George does most of the leg work…

In MY edit of this movie, Dwayne Johnson finds a sample of the serum that he decides to drink, and it immediately makes him as big as the massive monsters. Suddenly, he’s sliding down a building, and he drop-kicks Ralph or something. Then there could have been this whole battle where Johnson is bare-knuckling these monsters, and it is over-the-top, filled with explosions etc.

At one point, he takes Lizzy’s alligator snout, pulls it apart, and then beats Ralph to death with Lizzy’s jawbone. It would have been glorious. Whether or not George becomes good again or not is optional, but if it were up to me, Johnson would have killed George too.

It would have been ridiculous, over-the-top, and most of all entertaining. As an added bonus, it could be used to pump Johnson’s already over-inflated public persona.

Rampage is a mostly boring, sterile movie about a man and his love for an ape. And then some monsters destroy 1/8th of a city, and then the movie ends. 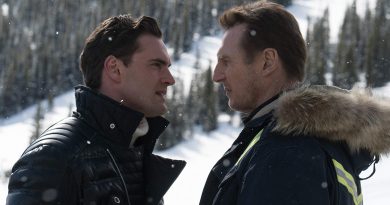 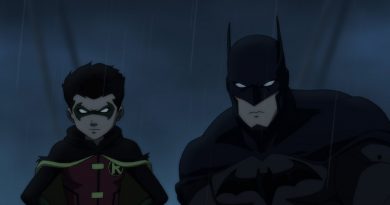 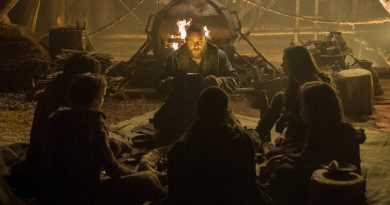